Being a pop culture icon for over two decades, Pokémon has evolved through the years from the basic video game into an anime and movie franchise that has fans bedazzled. Every character of the series has made a great impact in the millennial fans, with Pikachu and Ash staying intact as the start attractions. Collectible card games were once considered a fad, which has now been proven wrong with the trend being omnipresent even today.

One of the greatest appendages to this exciting series of creatures is the Pokémon Trading Card Game. Despite the launch of highly advanced digital games, the collectible card game has managed to stay relevant. Battling out with friends doesn’t get any more exciting than playing the cards; no favorite character needs to be imprinted on the cards for the game to be fun, allowing even the less enthusiastic fans to enjoy the game as much as the ardent fans do. Let us have a look into more details of the game.

In the Pokémon TCG, Trainer Cards and Energy Cards in the 60-card deck get the players to take up the roles of different Pokémon trainers. The maximum number of pokemons a player can battle with at a time is six, and the player evolves and switches out the Pokémon to exploit the elemental weaknesses. The three ways to win at Pokémon TCG are:

Taking all the cards of the opponent

Different types of cards are used in the game, and the players will need to use them to the best effect to pass each stage with a better score.

Forming a synergy is vital in the game as building up decks for the battle takes place. The Pokémon cards are the crucial ones for every player since the aforementioned power of the deck works only with these cards.

These are simply providing support to the player by helping them stay in the game by proving beneficial in certain situations or harming opponents when the player needs it the most.

The actions of a Pokémon are determined by the Energy card you place with a Pokémon card, making it one of the most critical decisions in the game.

You also need to understand what all cards represent in the battle before starting to play. 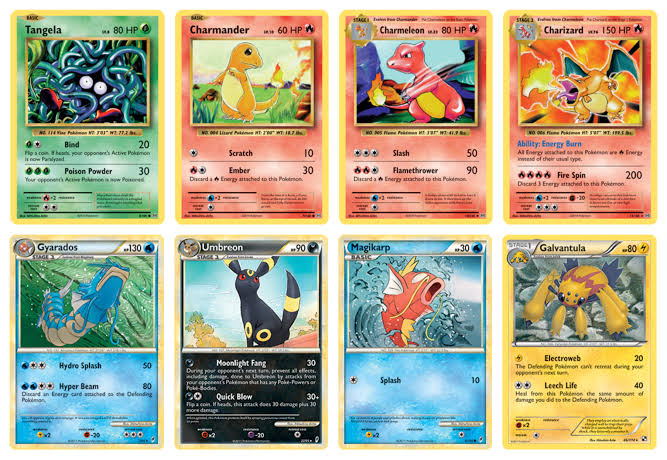 Flipping a coin decides the first player after the deck of cards are shuffled. Each player then draws seven cards, and a Basic Pokémon card is placed face-down in the Active Pokémon zone. Extra Basic Pokémon cards (up to five cards) can be placed on the Bench. Opponents get to draw an additional card each time you ask for a reshuffle of your cards when you don’t hold any Basic cards. The game starts when all players put their Pokémon cards face-up on the field. Drawing a card from the library marks the beginning of every player’s turn. The action of the cards can be decided by the player depending on their hand. The Active Pokémon card which the player retreats during their turn can be used to attack the opponent at the end of the turn.

These are the basics of the Pokémon TCG to get you through the initial stages of the game. You can always look deeper into the rules and details for an advanced game of TCG.