Pokémon may not feel like a game where you would expect to see slot machines. Still, the Game Corner has been a part of the Pokémon universe since the first GameBoy versions of the franchise were released back in the mid-90s.

How the Game Corner Works

The Games in Pokémon

Like real-world online casinos, the majority of gaming action in the Game Corner took place on slot machines. There were generally dozens of these in each Game Corner, and all of them featured the same basic game. In order to start playing on one of them, the player had to find a vacant machine. Some machines were occupied by non-playable characters who the player could talk to. In later games, Nintendo began to include some warnings about the problems that gambling could cause in the games by triggering the non-playable characters to explain that they had lost significant amounts of money while playing on the slot machines.

The slot machine game is a typical one-armed bandit with three spinning wheels. Instead of the traditional lemon, bar, and other fruit symbols that are commonplace on real-world slot machines, the icons are replaced with Pokémon, Poké Balls, and other related items. A little like the lemon item, which generally delivers a low pay-out or no pay-out at all on real-world slot machines, a Magikarp figure featured in some of the early versions of the game which did not trigger a pay-out.

The other game which featured in some editions of the game was card flip. This essentially worked like roulette, and 24 cards featuring Pokémon would be placed face down on the table. Players were then able to bet on which Pokémon would be revealed when they were turned face up. Like roulette, players could bet on the individual card that would be revealed or on a column, which gave them more chance of winning but a lower overall prize.

The Chances of Winning

Like in a real-world casino, players using the Game Corner had the opportunity to win very significant prizes (some of which were not obtainable in any other part of the game). However, a player doing averagely well would lose more money to the Game Corner than they put in. The Game Corner is, overall, a relatively realistic portrayal of gambling from this point of view. Obviously, no real money is at stake when players are using the facility, and losing money in the Game Corner does have the potential to make it significantly more difficult for players to progress further in the game. 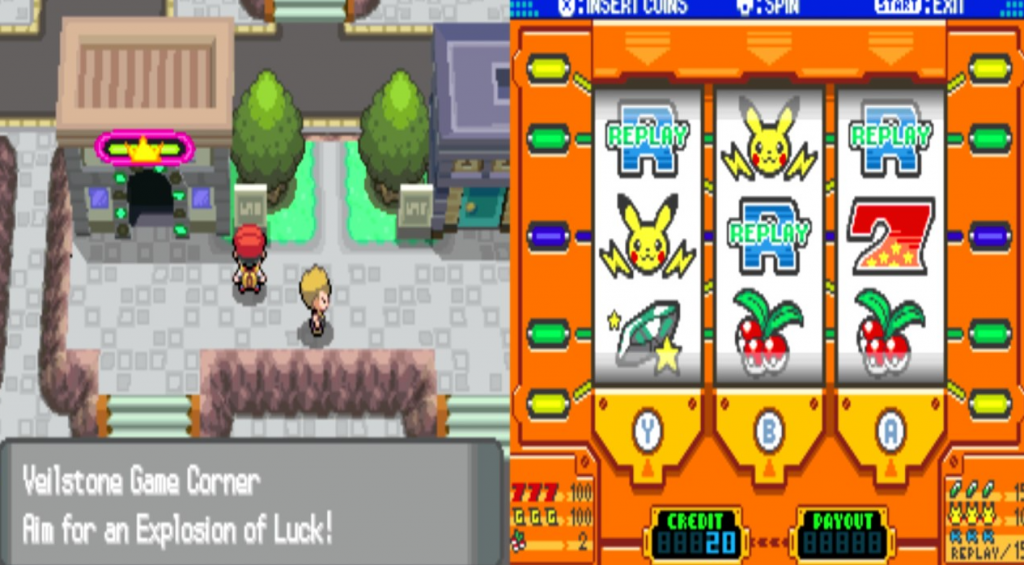 Prizes in the Game Corner

Coins can be exchanged for Pokémon, which are otherwise tricky to catch in the game. Players who want the prizes but do not want to participate in the games run by the Game Corner have the option of simply buying the coins required to obtain the reward they are interested in. While this option defeats the playing aspect of the Game Corner, it is probably the easiest way to unlock some of the items contained within.

Some Game Corners also contain vending machines that sell items that give extra health to Pokémon. These are purchased by using real money and are not directly related to the gambling aspect of the Game Corner.

The End of the Game Corner

Video game rating agencies around the world started to crack down on in-game gambling towards the end of the 2000s as part of a more generalized push against adult content being presented to children. While the Game Corner had been a key part of most Pokémon games up to this point, Nintendo and Game Freak, the companies behind the game, decided that the loss of Pokémon’s child-friendly status was not a hit that was worth taking in order to keep the popular Game Corner in the game. For this reason, from the fourth generation of Pokémon Games (Diamond and Pearl), the Game Corner no longer featured. The facility has also been removed from remakes of earlier games such as Ruby and Sapphire. This has marked the end of an era in Pokémon history.